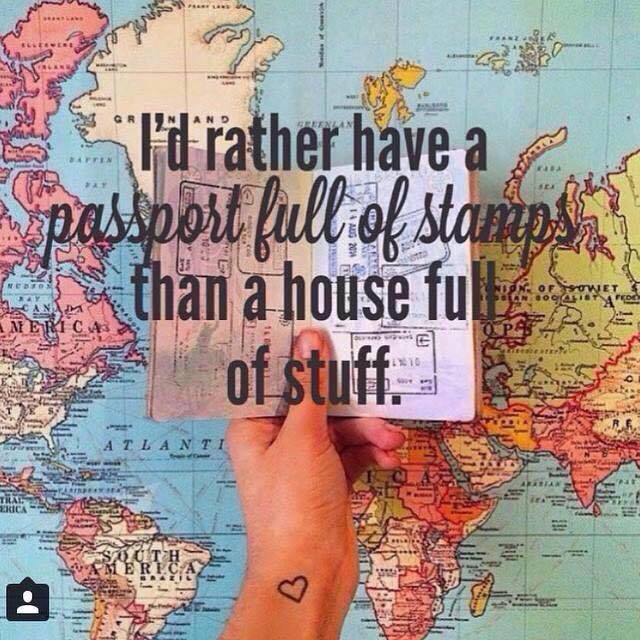 Letting go of the Stuff

I’m sitting here bored to tears counting the days. My mind is a wasteland and I couldn’t think of nothing to write about, so I reached out to a friend who always has great questions. Now I have things to write about. I will address these questions over the next few days.
The first question has actually been on my mind in the form of “what will I miss?”. The question was “how do you mentally prepare yourself to leave everything that you currently know?” Its a great question. And it requires a few separate answers. So let me break it down. Because there are categories and degrees at play here. First I will address the stuff. Because its Christmas – the biggest generator of “stuff”. In another post I will address the rest.

Breaking away from the stuff has been going on for some time. The first time I noticed my reaction to “stuff” was when I was on a grand tour rolling out some sort of program for Fairmont. Packaging? HSIA? I don’t know. But whatever it was I had packed REALLY well. I was pleased with everything in my suitcase. When I came home finally I was a little disgruntled that I had to incorporate more stuff back into my life. I loved that trip and I loved that feeling and it was the beginning of my separation from stuff. Every time I come home from a trip I feel the same way.

The second lesson in letting go of stuff was my parents house. I had spent the better part of 40 years associated with that home. I thought I would gather up every minor thing and bring it along for life. How could I part with anything? Then I started to bring things to my home and I realized that without the context of my parents or their home, much of that “stuff” became garage sale material. It wasn’t the stuff, it was the memory. Oh, I still have a few things that I refuse to part with. My dad’s hat. A vase that we have had my entire life. My moms china. But mostly – it’s all gone. Even when the house came down and ended up as rubble, I was totally ok with it. No one else could have lived in that house. No one. So it was ok that its gone. I felt no sadness at that time.

The third lesson that I am still having a hard time reconciling happened when my best friends husband tried to kill her and she ended up in the psych ward with the clothes on her back and a restraining order. (Ok so if you don’t know the story….sorry. It requires a WHOLE other blog) (And a movie in which Adele plays me). I had a lot of anxiety over that. I STILL have a lot of anxiety over that but at the time, I was really concerned about stuff. Not the most important part of my anxiety of course. There was such a rich field of things to be anxious about. But lingering not far from the surface was the stuff. My concern for the stuff. Over time, as I watched her train her laser focus on the important things, I realized that stuff is stuff. Stuff comes and goes. So do houses. And cars. Its just stuff. Some stuff is more important than others. But its just stuff. The only thing that makes stuff important is what you attach to it. If you feel nothing for a thing, it is a thing. Even if it that thing is attached to a ton of memories……the memories are important. Not the thing. So packing up everything in my house and getting it gone has been a long overdue experience for me.

I have to be honest though. I have not felt that sense of relief that I thought would come. That “aaahhhhh” sense of a load lightened. I feel the exact same as I did when I started, only tired. From all the moving. But I attribute that to the fact that everything still looks “normal” in my house. My basement is empty but I never go down there. Same same in the garage. I might feel differently if I see the house empty of all the furniture but that may not happen. I may not be here when the movers come to take it all away. Oh well. Maybe that’s good.

I’m really excited to start off fresh. I’m not taking anything other than clothes with me. No stuff. No need. If I need something, I will get it there. Everything else that I am keeping will be here. In my new apartment. Which I may not even live in before I leave.

So as you unwrap all your packages on Christmas morning (something I will happily not have to deal with), remember – its only stuff, until you attached something emotional to it.

How will I feel when I am boarding the plane with no real home? No car. No roots. Nothing but a couple bags of clothes? NO IDEA. But I bet we are going to find out!