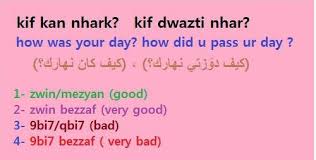 What are you trying to say?

Language is a huge deal in Morocco. If you are coming to visit as a tourist, it’s sort of a dream destination because most people speak French, which is a pretty accessible language. And most people who rub up against tourists (FIGURATIVELY – settle down), speak some level of passable English. But you will not need to spend much time here, paying attention to the culture, to begin to understand the complications. And if you move here? Well. Let me tell you…

First, my personal position on languages. I am Canadian. Which means every time I state my nationality someone says “Why you not speak French?” “Dude, don’t make me bore with you our politics.” I don’t. I don’t speak French. More on that in a moment. I have never been a student of languages. I have never paid attention to language studies. I have never, until this year, listened to the extraordinarily subtle sounds that different languages offer.

Oh sure I’ve travelled all over creation and I can speak some level of tourist Italian, Russian, German, Jamaican, French, Japanese (?) and (apparently not) Spanish. But literally – A FEW WORDS.

So when I came to Morocco the first time, I was pleased that some of my grade school “sit in this chair you are Canadian and you WILL learn French damn it” skills came back. Some words appeared in my brain. I could read it with apparently no problems. But speaking it garnered some hearty laughter and so I quickly learned that while I am able to boost my vocabulary online and with the help of friends, speaking French may not be my “thing”.

Here is what I have come to learn over the months as I have settled into this new life of mine. In Morocco, language plays as much a role in the social and economic success of the people as money. And it is damn complicated.

First, there are three (3) official languages. Arabic (classic), French, (the language of business) and Berber. (But only since 2012).

There are therefore 3 different alphabets. Arabic, Latin, and Berber (the alphabet is called tifinigh).

Now – dialects. There is of course classic Arabic which is universally understood by people who speak it. There is Darija which is specifically Moroccan Arabic. There are a few different dialects of Darija. There is French. Which is classic French. The reason I am laughed at when I speak French here is because my “accent” (I have one?) is ridiculous to them. It comes from the 18th century when a group of (SURPRISE!) separatists left France and went to Canada. It has little relation to the French spoken here. When I parlez, dogs tilt their heads in quizzical amusement.

And there is also Berber, or Tamazight (tah-ma-zeer). Berber has three main different dialects; Taschelhit, Tuareg, and Tamzight. (Although many more exist.)

SO. When you are conducting business; signing a lease, a contract, filling in forms at the airport, applying for things – you encounter French. This is good news for me because Canadian grade school french focused on written words and not pronunciation so I am pretty ok with reading menus and basic forms. There is a GIANT, and by that I mean sizeable (what did you think I meant?) community of French expats or half year residents here. So there are a lot of French speakers that I just don’t even try to talk to. We have no things in common. Aside from fighting over the same apartment spaces and sharing elevators.

Then there is Arabic. This is spoken formally. On the phone. In business meetings. Anytime a common ground needs to be quickly met, out comes the classic Arabic. I’m starting to learn a few basic words and phrases. And there are some words that span all the languages and dialects. Arabic is on all the signs, as well as French hamdoolah (“thanks be to God” in Arabic). I can usually determine someones importance or (distant) relationship to my friends, based on the fact that classic Arabic appeared. Now let’s be clear here. If you speak Arabic or Darija in Morocco, you also probably speak French. Because these are urban languages and you have to speak French to do business.

Now consider this tiny factoid. High school is taught in Arabic/Darija. University is taught in French. Put that in your “struggling for grades” hat and smoke it.

So. Darija is a derivative of Arabic. Berber is an entirely different language. And Berber is not widely spoken. A lot of people who do speak Berber do so because they come from the south or from rural areas. In the mountains and the desert and the “outlying” regions, Berber is typically the only language spoken. So when you venture out of the cities – please – take a guide that speaks Berber. Now are you starting to see these social and economic barriers? If you speak Berber, chances are good you speak one dialect of it, and you do not speak Darija or Arabic because those are languages spoken in schools and cities. So when you come to a city, for healthcare, commerce, vacation or whatnot, you may understand half a sentence here and there, but you will have difficulty. It would be not unlike me going to Newfoundland. So because Berber is the language of the rural areas, the poor and uneducated tend to stay that way, unless they are first able to master another language. Getting it now?

Also, Berber is an oral tradition. The Berber alphabet was thought to be lost for many years and is now coming back. But if you do not know the Berber alphabet, you can’t read the words. So if you are texting for example in Berber, you use Latin characters. Like in the photo above. You would type “mezyan” which means good in a couple of languages. So you see the word and pronounce it and you start to associate it and then you learn more and more yes? But if the word is typed in tifinigh (Berber alphabet) you have to learn characters and then word. Its like the language is locked up. SO it was disappointing to those who wish to see the Berber language reappear and (dare we say) flourish, when the government made it an official language, and stipulated that it would be added to public signage, but only in tifinigh. So now to most people it just looks pretty, and sorta tribal on all the signs.

So now you can see things are a little sketchy. Berber is a really interesting language because it is a directive, like the actual Berber bloodline, of many different influences. You can listen to a Berber speak and clearly hear French and Spanish words in there. But it is a fast language sometimes, and it is very different from Arabic when spoken. It is quite exotic and foreign to listen to, to really listen. You also come to realize that some words have no translation, like “email”or “Kardashian” for example.

And its all bloody hard to learn. You see, while I am spending time at home boosting my French vocab, I decided that I would join a friend in taking some Darija classes. I am finding that, more so even than French, the people I am rubbing up against, (again?) are mostly Darija speakers. And if you are in Riads, or the Medina, or working with drivers and so on, it is almost essential to have some phrases to banty about. So off we go to Darija lessons 2 days a week. I have learned that it is in fact a lot of work in the back of your throat. Not rolled R’s but kh. Breathy sounds. A lot of breathy sounds. BUT it sounds just like it is spelled so that’s good news. We started to learn the Arabic alphabet which I thought was really fun. We learned the name of the letter, the symbol, and the sound. 3 columns right? So Sheen for example is the name of this character ش and the sound is sh. But then you work your way through the 28 characters and find out that there are repeats. I look at my instructor and say “Salah, this is a repeat” and he says “yes”. Dead silence. Ah…… Apparently its all in the tone and pitch. Because there is a whole other set of characters that denote phonetics because each freaking letter can be spoken 6 different ways. Tah, too, te, tee and so on. STOP THE MADNESS. Cause you thought this was going to be easy. HA. Then I go to the next class and Salah pulls out this giant chart. The chart you see, show the characters that we learned and then reveals to the unsuspecting that each damn character is actually written 3 completely different ways, depending on where it is in the sentence!!!!!!!! A.U.F.K.M?

Now, I have some Berber friends. We all know I love me a good Berber. I have stated publicly that my goal is understand the Berber culture. To share that knowledge with the world. But I can’t understand it or speak it. SO back I go to Salah, three times a week now, to learn Berber too. (NO alphabet). Berber is a language that has a ton of consonants. And somehow they cram three consonants into one sound. I have not worked that out yet. I am skeptical. It sounds different. Its not just different words from Arabic and Darija, but different actual mouth muscles. When I tell people who speak Darija that I am learning Berber they just laugh and walk away. So hard. BUT, I want to talk to Berbers. And I know a Berber lady that I ADORE, and it is my goal to be able to speak to her one day, without intervention. If only to say, “thanks for the coffee”.

So you can imagine when I slipped over the border and entered Spain recently. Then I found out that they use sibilants very differently than I was prepared for back in the U S of A. Gracias. Grassy Ass. Its been embedded in my head and then I get to Spain and they say GraTHias. Took me 4 damn days to not feel like an idiot when I said thank you to people. No one told me this. No one told me the people of Spain spend a lot of time with their tongues at the front of their mouths. I have never travelled to a Spanish country. Jesus. This all on top of my complete language paralysis. So when someone approached me and said “hello” I opened my mouth and NOTHING came out.