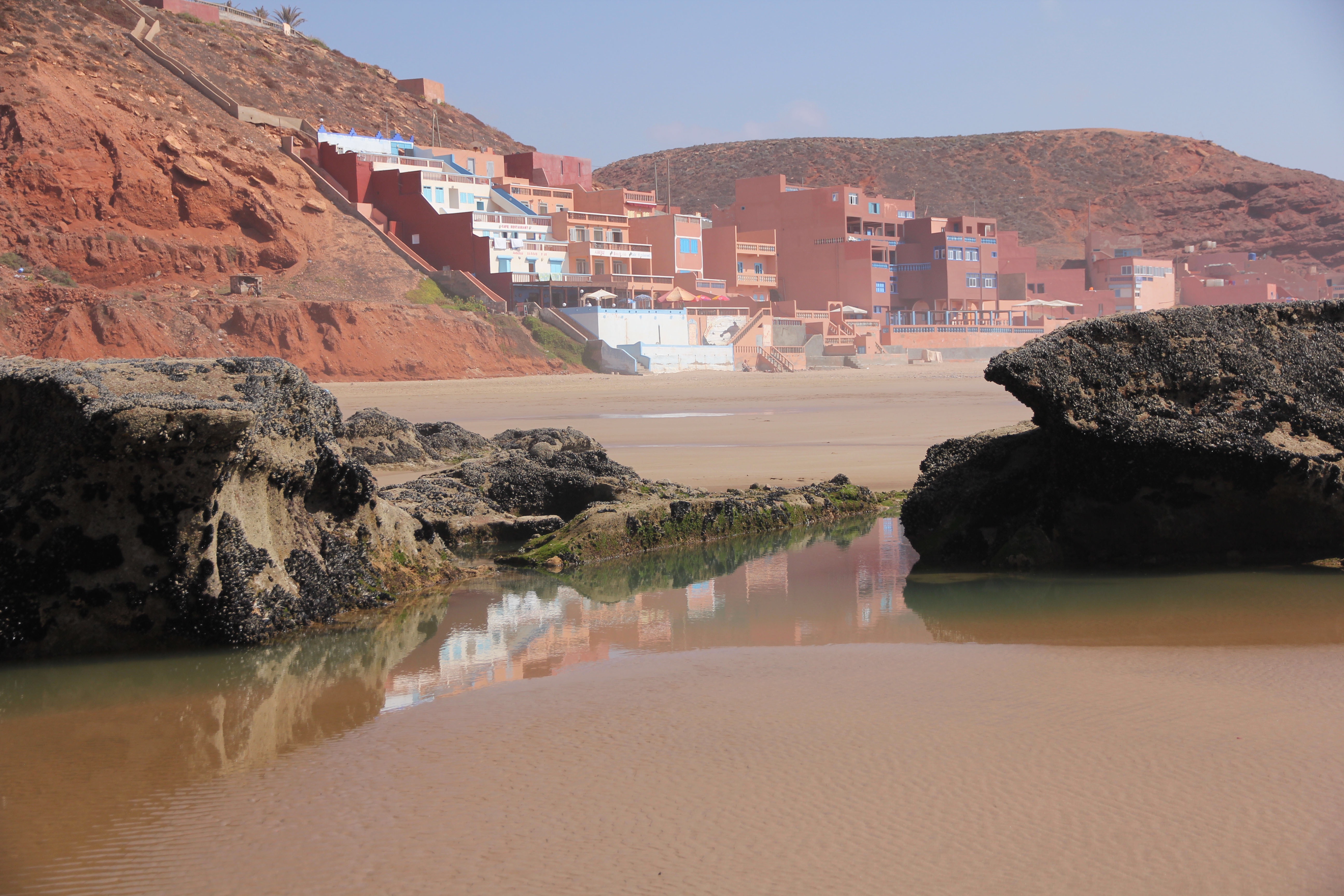 It’s always a good idea to get out of Marrakech. It’s a lovely city and a great place to live, don’t get me wrong. But I do not have rope tying my feet to one spot and I came to Morocco because – Morocco. Not Marrakech. So when a window of time presented itself, I said “I think I want to go and see something somewhere. Do you have any ideas?” And the response was “Why yes. Take a brother, go to the coast. See what there is to see.”
So I packed up a few things. My BB Jamal, (Berber brother in this case) and my camera and off we went for a little look-see tour. The goal was to get to Sidi Ifni. I had seen photos before and it immediately went on my list. We looked at the map and chose a route that included a stop in a town called Tiznit, on to Sidi Ifni and coming back we would return through Agadir. Off we went.

I had heard of Tiznit as recently as the day before we left. A new friend in Morocco has some suppliers there. It’s a silver centre. There is a lot of silver and silver artisans on the coast. I was intrigued.

Along the way we travelled on new and well maintained toll roads. There were hydro lines running well out into the countryside. Road signs. Lots of runaway lanes on the downhills for trucks to put into deep sand in the event of brake failure. There were roadside stations with Disney things and takeaway tagine and ice cream and stuff. Very advanced infrastructure. Nice to see. But as much as I like to see advancement, I fear advancement at the same time, lest it spoil this beautiful place.

Once we arrived in Tiznit, with little advance knowledge aside from what I had glimpsed briefly on a map, we cruised the main strip.  There is a medina, and an aglou (beach), and some buildings. That’s about Tiznit. We went looking for a Riad that I had spotted on TripAdvisor but it had no phone number posted so we had to stop, ask, search, walk, ask, search and wonder down a blind alley. Finally we found it and there was a phone number posted outside but no one at home. Oh well. I chose it because it had a Berber name. But it was not meant to be.

We went to the aglou. It was beautiful. We had stopped along the way at another beach that was deserted and stunning!!! The one in Tiznit was way way way out of town and while it had a “Boardwalk” and some restaurants and a camel or two, it was pretty deserted.
On the way to the beach we stopped and took some photos on the side of the road of a herd of sheep. As we stood there Jamal talked to the nomad who was tending the flock and we learned his name is Hamid. He was very shy as you would expect of a humble Berber nomad faced suddenly with a crazy Canadian asking all sorts of questions. He allowed me to take a photo and it’s one of my favorite photos ever.

Tiznit, as it turns out, is two things. It’s a Berber city through and through and it is a business place. Not so much a tourist place. Which is nice. I like that. We took a walk through the medina and it is 100% Moroccan. It was lovely. Berber flowed out of my mouth at every turn.   Well, the 10 words I’m confident with. (and growing). There were some pretty rustic butchers, vegetables and all sorts of h7nouts. (HA-noot – think depeneur – small variety store).

Next day was on to Sidi Ifni. Well, Legzira Beach to be precise. I had done some research and had a hotel in mind on the beach. The beach is about 12 minutes north of the actual town. Sidi Ifni itself was a really cute little village. A growing seaport and a military base. We were there at midday so we didn’t see many people. We had a wonderful fish tagine in the market. Nice.

The beach of Legzira is spectacular. We found a well rated auberge called the Legzira Beach Club. We had two rooms, mine facing the ocean with the windows open all night, breakfast and dinner all in was half the cost of my last electric bill. About $80 Canadian. (mid week though so don’t get too excited.) Our host Hamid was an absolutely delightful man. He took care of our meals and reflected the environment – a perfectly chill, hardworking older man. The walk along the beach, the lack of wifi, no TV, the thundering waves, the sand at low tide, and the salty ocean air made for a really wonderful stay.

Next we were on to Agadir. A lovely city. A big city on the coast. Many tourists. Many of them German or British. Some French but this seems to be the destination for the majority of Europeans. Massive beach boardwalk, lots of entertainment, restaurants, night clubs. A big place and a lovely destination. After the night before it took me some serious settling in. It was quite a contrast. We found a nice spot for the night, went to the Up – Agadir Oflou – literally meaning up. It was a lovely vistas. With camels. For some reason I don’t understand. But there were camels up there. Cute ones too.

Next day we were headed home and we decided to take the long way so we could see what you don’t see on the toll routes. We were going back a bit early and had no need to rush so it was a good plan. We headed to Essaouira, everyones’ favourite port city, and as we started out I realized with a giggle that we would get there just in time for lunch, which meant we could hit my all time favorite restaurant  and have Rachida’s seafood salad. Every three weeks or so I have the same conversation / craving – “Oh you’re in Essaouira? Damn! Seafood salad.” It was every bits as wonderful as always. Thanks Rachida and Hafid.

After that it was all down hill so we headed back to Marrakech. A wonderful little 4 day excursion to connect with the coast. We will definitely be putting together some excursion ideas for that route. Its’ not well travelled. Most tourists only get as far as Essaouira or Agadir. But this place – Sidi Ifni – its well worth the drive!