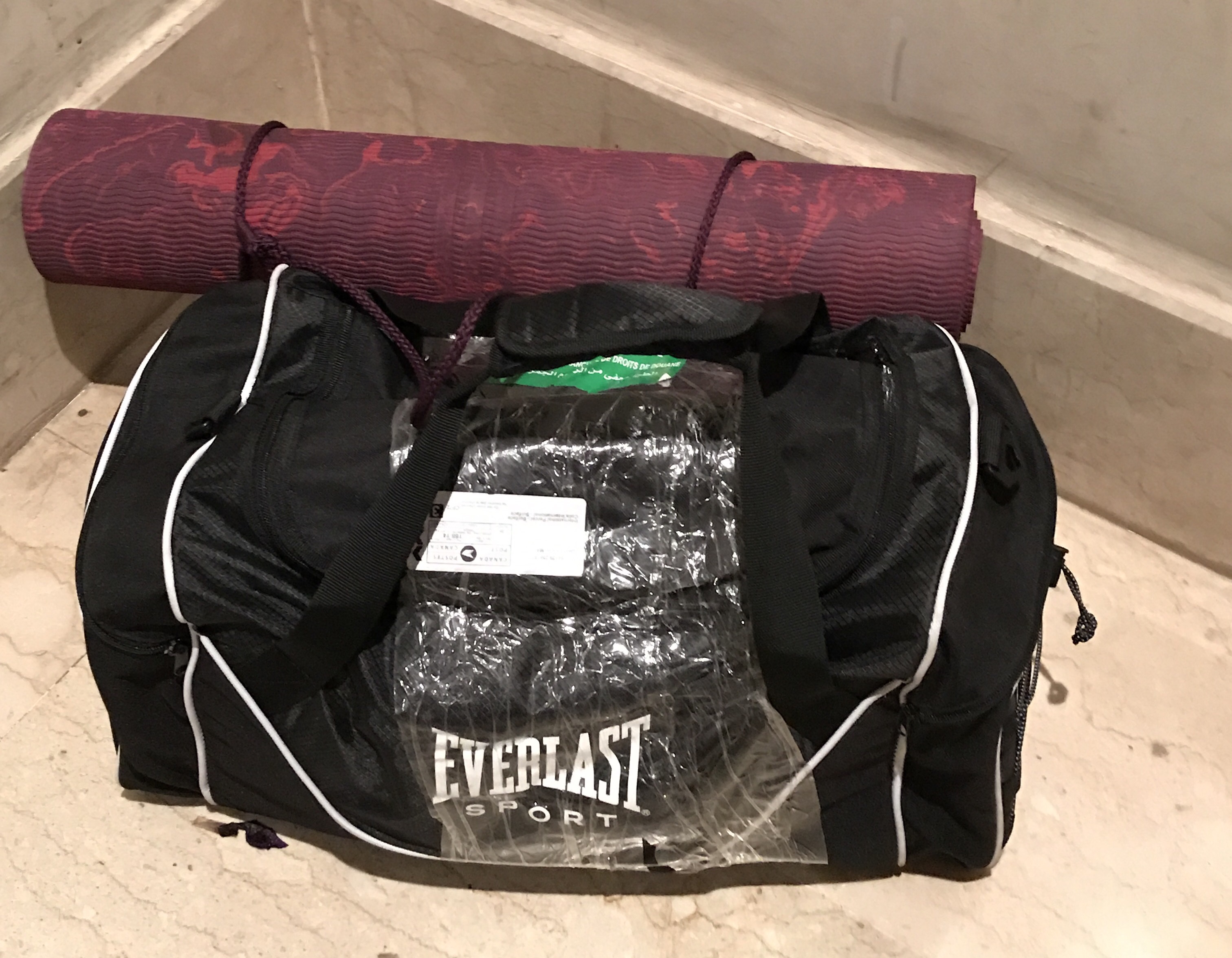 Another day, another task. I woke up on Friday to a text from the post office (!!!!!). This is revolutionary. The message written in French announced the arrival of a package I had been tracking from Canada Post.

Back in August, my friend Kate found herself in Toronto. I know – crazy. It was totally a summer of all my worlds colliding. Faces to names. No more guessing at who I was spending all my time with for my Canadian friends, and an introduction to my natural habitat for my “Moroccan” friends.

Fast forward to my basement apartment in Toronto, Kates’ luggage and all my shit. We ended up buying a cheap duffle bag and Kate filled it with overflow clothes from a month of travel. The intention was to mail it back to Morocco and she would have less stuff to go forward with for land travel in the U.K.

Great idea. So she packs up the bag and declares it full. I stick my hand in there and declare it to have LOADS of room. I ended up adding in all my heavy stuff. The red lentils and heavy bottles of vitamins and so on. (I don’t remember now what’s in there).

So a month passes. I check online once in awhile and see the progress. Then bam – I get the text. I was shocked. Last year I mailed back a huge suitcase and smaller one and no one called me. No one said a damn word. I had to hunt that thing down like Donald Trump Jr. on an African Safari. I was so happy to have this advancement in modernity in the palm of my hands!

I spent all that morning putting off the inevitable. But it was Friday so I thought I should get to it. I found out from a friend that the post office closes at 3:30 so at 2:30 I finally get it together and go. And it’s hot out. After a short 12 minute walk, I pull up to the door of the Post Office, glance in and hear angels singing. It’s empty! No one there. This is going to be awesome!!!

The man at the wide open door doesn’t want to let me pass. He’s talking to a lady. I glance in again and notice, there is NO ONE there. Not even workers. The man then says “demain Madame”

I don’t understand. (Although let’s be honest, I understand completely). He says many more words in French and try as I may I don’t catch any of them. “Fermez?” I say. More French words. Or maybe Spanish I really don’t know. I was not picking up anything that guy was putting down.

Finally I realize that the open doors lead to a closed post office and I am S.O.L. Then I look at the sign. It says, pretty clearly, that on Fridays the post office closes at 4:15. Its 3:00. I got nothing. Shake my head and walk away.

Turns out to be New Years. I learned this much later in the day from Facebook. You’d never know by the openings and closings of shops. And there are always kids on the streets so little people traffic is no indicator. And to be honest, most every Friday and many Tuesdays end up being holidays here. Without the corporate insistence on productivity and government regulations it’s really a free for all on the holiday schedule.

So back I go on Monday. And I’m determined. I hit up my early morning yoga class and then march on over to the Post Office.

Not so empty this time. There are several clumps of people in no organized manner. But I know from experience that packages go out on the right side and come in on the left side so I took my place in line on the left half of the counters.

I am queued behind 4 other people but in my immediate sight there are 17 people. I try to work out the system. While I am noodling over that, trying to determine who is on line properly and who is clumping, my line keeps growing. Wider, not longer. Now it’s a line only if a mosh pit were a line. Which it is not.

Then this woman shows up beside me. If you’ve ever been on line in Morocco you know that Moroccan women can’t see white people and I suppose they figure they have the birthright to take the place right ahead of you. I’m not having it. I shift. I have a yoga mat. I’m not having your nonsense and I will stand my ground, Lady!

Then I FEEL her eyeing me up and down. There was actual head movement. It went on for a completely inappropriate length of time. So I casually turn, meet her eye and give her my best “LOOK…..” face. But she continues to try and jockey in front of me. Encroyable!

So I turn my back, jut out my yoga mat and go back to working out the system. It seems to be based on the McDonalds school of business – hand your papers to the man at the counter and move to the left to wait for your package to be retrieved and issued. Except people keep coming and joining that clump. At one point an official came over and made them line up western style. They regressed to a clump in mere seconds.

THEN, the audacious little bitch to my back/side just goes right up to the counter and addresses the man behind it and the 3 ladies in front of me. She doesn’t want to just skip me, she wants to jump the entire queue. But we 5 ahead of her have been standing without action for 25 minutes and there is no way in hell the others are having ANY of that! A lot of Darija ensues. In my mind I am standing tall with my homeys. I know how to say things like “Please give me some cheese and 6 eggs”, and “before school today I was busy working.” I can join in if they need my support! But alas, she moves back. BESIDE me.

So finally the fray to the left clears off and some action happens. Everyone hands their paper (mostly their phones) to the man at the counter in turn and he records the numbers on the computer for the man in the back to gather this next group of packages. I swing my hips in front of the A.L.B., hand in my ticket and move to the side clump. I see our duffle come out on the trolley! Halleljuah.

It has not escaped my attention that there is no one in the customs offices along the side wall. No extraneous personnel to be found. This bodes well for me because when they are there, and the place is not busy, they make you open the package and they go through it piece by piece in an attempt to gain random levies on “imports”. How was I going to pass off Kates clothing as “mine”? She is literally half my size. I was uber relieved this was not happening. But I WAS prepared to pay something, because nothing is free in Morocco. Especially at the post office.

The man hands out the packages one at a time. In the same order that we queued in. He takes the ID, records it all in a paper ledger, you sign and go. My turn comes, and he says rapidly in French “skfjrbfjsiejfbskstroiscent” I swear I hear “300” so I pull some notes out of my wallet and try so hard to see if he writes the levy somewhere for my clarification. I hand him a 200 and a 100 thinking “huh, I’m so smart in French.” He wiggles his finger at me and takes the 100. I’m confused.

Now I don’t know if this man has OCD or if he is under strict guidance from his supervisors (hahahaha – it’s Morocco) to only take 5 people at a time, or if he is just a petty human being like the rest of us, but it has to be noted that he stopped the line at the pushy one. She had to stand and wait for all of our packages to be brought out, recorded and taken. She was in the next batch.

I love that. Today’s pettiness complete! Package secured. Another successful shipment into the country.