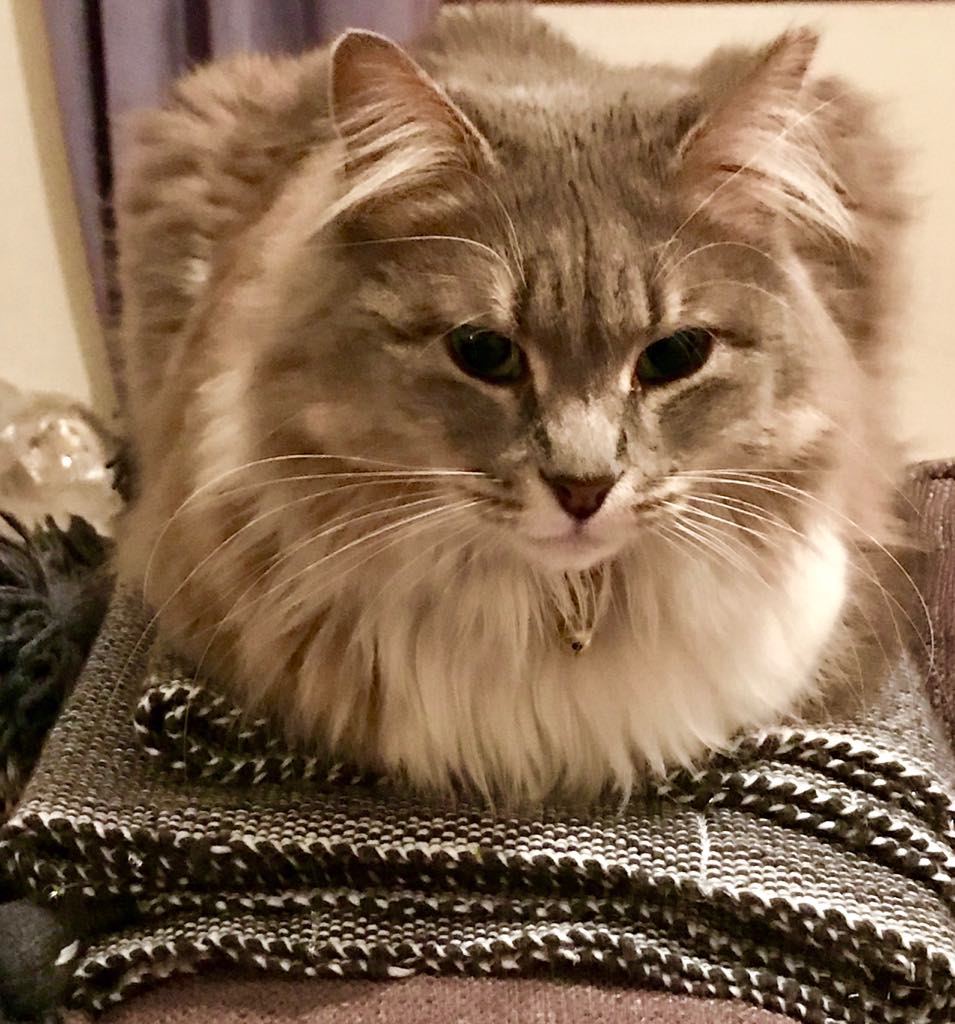 I’ve posted more than a few cat photos on Facebook and IG lately. When I posted some recently of a cat in my home, I got a few 911 messages. “Are you a cat person now?” “Did you get a cat???” “What the hell is happening over there?”

I assure you, no, I didn’t get a cat, nor do I intend to. I’m a dog person top to bottom. That’s it. But there are A LOT of cats here and some of them are pretty cute. That said, I have only ever “hosted” one cat. Polly the Panther Woods-Gardinya. And frankly, that’s enough. She is an interesting cat. But more on that in a moment.

I have developed a “relationship” with a few cats I have to admit. There is one particularly fat cat that lives at the local hanout (think 7-11 without the slurpees). She is a big ginger and I love to scratch her at least once a day. She is always happy to see me, and by happy I mean, she wakes up.

Moroccans have a lot of issues with the animal / human relationship. I’m not going to get into that but suffice it to say this is not a culture that understands domestication. I get a lot of side-eye when I talk to the kitty in the hanout.

I wish I knew the Amazigh word for “weirdo” because I’m sure its muttered many times in my direction.

It always makes me scratch my head when I think even a little about the human to animal psyche. Let’s be clear, I never dressed Daisy up in pajamas or Halloween outfits.  I never made her pose in weird human like activities.  I am always fascinated at how much time and emotional investment Western people have with pets. There is a line in every healthy relationship and that one seems to get crossed with reckless abandon.

Which brings me to my friend Polly and her rise from street cat to International super star. Polly has been adopted by my friend Kate. Kate loves animals and keeps a watchful eye out on the street kids. Often when passing a particularly distressed kitty she will stop and get food for it, or toss food into an empty lot where kittens are known to wander. So it’s no surprise that she found one to call her own.

One of the problems with having a pet as an expat is travel. We travel. A lot. It’s why we live here. The proximity to Europe is one of the big draws. We also live many miles away so visits home tend to be protracted affairs. Having an animal then requires a sitter. And this is how Polly came to have more than four mother figures in her life. Four women. All of whom have played a role in Polly’s upbringing and happiness. Now remember – she comes from the streets. She has done nothing to earn this status. She’s a cat. But still she lives a life some people could only dream of.

First there is Polly’s natural mother – Kate. Since rescuing Polly from the streets of Marrakech, Kate has provided Polly with a nice home. She is free to come and go as she pleases through the door that Kate props open so she can get back to her roots. She goes out sometimes overnight. Polly is so well known in the area that upon entering the building breezeway, Norman the Doorman will often point in the cats’ direction if Kate should look to be on the hunt. Everyone knows where the cat is. “She belongs to the German lady.” (Even though Kate is Australian.)

She has been seen boarding a bus, visiting in other random apartments where the doors might be open (including mine) and is often found sitting in the courtyard, on a chair, hidden from view but in full command of her kingdom. Polly has brought friends home to feed on her kibble. Kate has provided Polly with a pretty pink collar and thank God a bell most recently. She has bought her her own carpet, and recently brought “cat soup” all the way from Australia. I don’t know what that is.

Polly’s other mother is Mariam. Mariam is the most un-Moroccan Moroccan you can imagine. She’s a haircutting, wrist tattooing, non tagine eating, well educated young lady who watched the entire Hangover series with me on Netflix and will never marry a Moroccan man. I could write an entire blog post on that one, but that’s for later.

Mariam came to spend an increasing amount of time with Kate and therefore Polly and Polly is quite fond of Mariam. In fact, Polly is so fond of Mariam that she allows Mariam to put her in the bathtub. It seems that Mariam likes her cat to be clean. So into the bath she goes.

Mariam was charged with minding Polly during one of Kate’s longer journeys away from Morocco. Mariam needed to go to her family home during that time so she took Polly with her; in a cat carrier, in a grand taxi, up and over Tizi ‘n Tichka pass in the High Atlas Mountains, to her village near Ouarzazate. This trip fostered such a close relationship with Mariam’s family, that Polly will now Facetime with Mariams’ mother and sisters from Marrakech. Polly, also known as “Tizi n’ Tichcat.”

Returned from Ouarzazate and transferred to me through a long series of complicated hand offs, Polly came to stay with me the first time last year. She and I agreed to just keep a distance. She slept most of the time on the spare bed. I ignored her and she ignored me and we muddled through our time together. Like Daisy, she learned that you can yell and scream at me all you want in the morning, but coffee comes first. THEN animals get fed. No other order exists.

Polly was rather horrified to realize that she was not getting a street pass when she was here. I was not about to let her out and then find myself sitting in the hallway outside Kates’ apartment waiting for the cat to return. So she was an unhappy indoor cat. When she went home after that stay, wrapped in her cashmere carrier sweater,  I swear she stuck out her tongue at me.

The other woman in Polly’s life is Christine. A lovely, petite, older French lady who lives in our building. Christine does not speak a word of English but this does not stop her from telling you long, long stories when you meet. She is lovely.

Christine gets up early in the morning, takes a bag of supplies and checks on/ feeds ALL the cats in the neighbourhood. All of them. She had quite a fit one day in the lobby when she ran into me and wanted to know “where is Kate?” She thought Polly had been hit by a car and was terribly upset, but it turns out Polly was safe with me. Phew.

There have been many many very sad cat losses and Christine bears every one as if it were her own. She makes it her business to look after Polly. One day Kate opened her door to find two lovely little cat dishes on her stoop. Another day she had a note from Christine, written in Google translate English that was signed off “caress Loppy for me.” (sic) Bless her heart she is a lovely woman. She once left some medicine for Kate to give “Loppy” with instructions to get more, because she determined that Polly was “hoarse” and needed some throat meds. Just sit with that for a minute.

The last time I saw Christine she was checking in with the hanout man over my fat ginger, asking how she was recovering after the cold she had, and if she had had a bath lately. Karim the hanout man said “No, non douche, par se que, she was sick.” (I don’t know how to say it in French)

On Polly’s last visit to me, we got along much better. In fact we kind of hung out a little. I had a Moroccan friend here who called her “cat”, and said “Go outside and kill your lunch. Stop eating Western peoples money.” (I later saw the same Moroccan making kissy faces at Polly so…)

And that my friends is the closest I plan on getting to a cat. Ever. I love my street kitties but they are not coming home with me. Seems Polly was the lucky one among them.