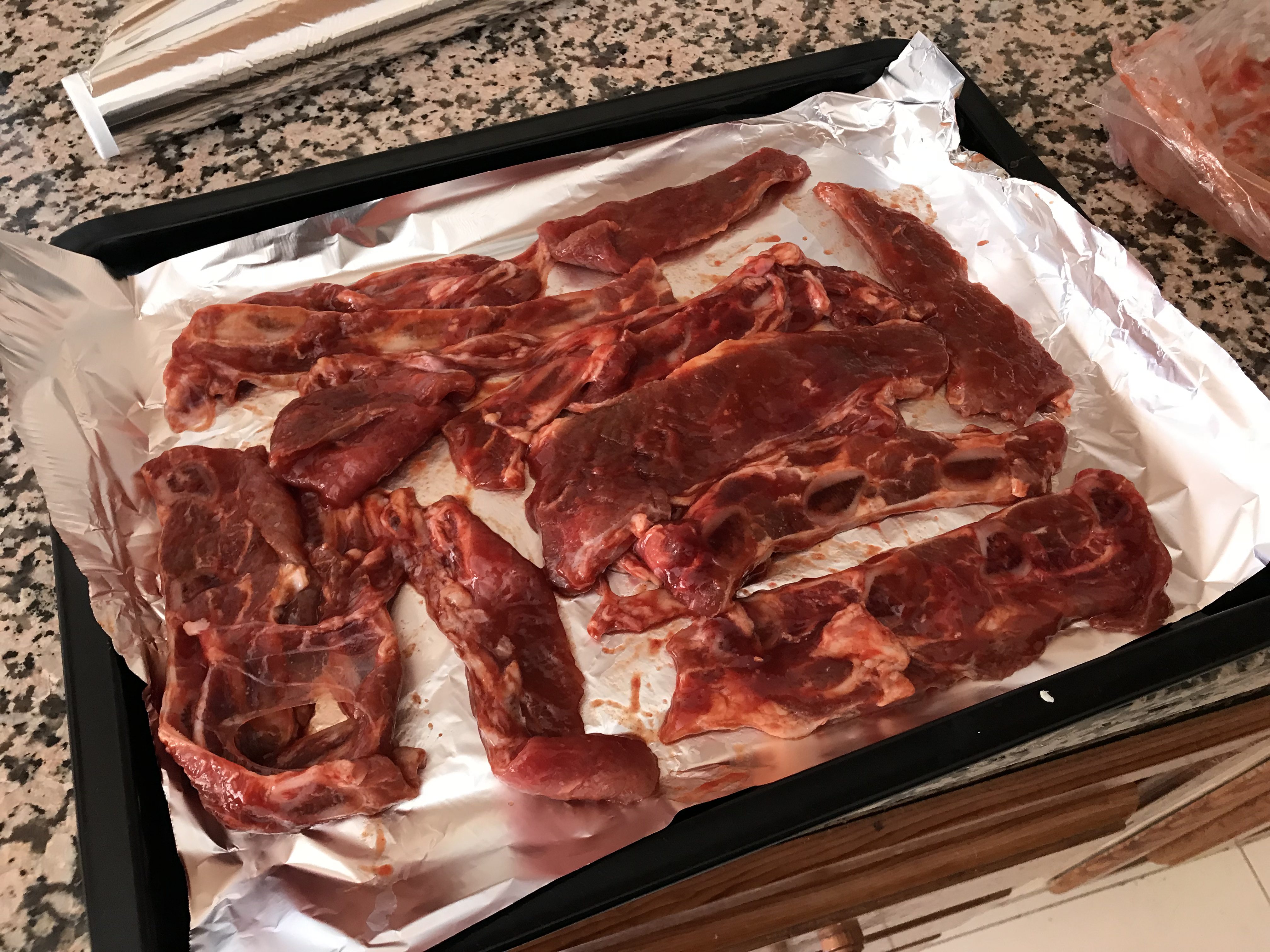 I want to talk about my relationship with food prep. Not food. That’s for other bloggers. You can hire any number of people and read any number of blogs about managing your relationship with food. I am coming to terms with my own, in my own time. No, now I want to discuss food prep. Its an area that causes me anxiety and apparently today, hilarity.

Brief background. For my more formative years, I grew up in a traditional home with traditional roles. My mother had a well balanced healthy meal on the table, with a mandatory glass of milk, every night at 6:15. My father was a farmer and the meal was timed precisely so that there was quiet when the weather came on. I went to a private school and was served a hot lunch every day, in the dining hall, after grace was said by the Headmaster. My cooking skills as a child / young adult were debatable.

Then came university, which, let’s face it is a free for all. I lived on my own for most of it. I got great at making BLT’s and spaghetti and the rest is a blur. Even my tenure at school in Boston = blur.

Then I went to work in the hotel business which for 10 years was really a culinary failures dream. I was guaranteed at LEAST one hot, healthy meal a day. When I worked in the actual kitchen I was often invited to eat with the Executive Chef after work at night. I lived on garlic mash potatoes and cucumber sandwiches for 2 years in Victoria. And the occassional curry buffer in the Bengal Lounge. Heaven. That was amazing.

There was a time in my life, when I took on the adult role of mistress of the house. I lived with a succession of men, which sounds a lot more salacious than it was. But after a 3 year live-in relationship followed by another 3 year live-in relationship, I became adept at coming home from work and preparing dinner for 1.5 people. Realistically, the first one often worked the afternoon shift, and the second one often drank dinner out. So it wasn’t all bad. I did Thanksgiving dinner and Christmas feasts. I have hosted dinner parties. I wasn’t a complete idiot.

As I chose to live longer and longer in a solo existence, (because honestly, ladies, 85% of us are going to end up single, living alone for at least half our lives (Thanks God), I just chose to fast forward to my happiness. But that meant that I dropped all pretense of being a cook in any real way. Don’t get me wrong, I was very good at making a chicken breast and some vegetables for dinner. I was a friend of the barbecue. I had my go-to’s and I’ve managed more complex dishes. I was not always a microwave hag or eat cereal over the sink kind of girl. I had standards.

But then the last year or so that I lived in Toronto I became spoiled by my bestie Sandra. She always included my in their family meals, and I was always happy to show up at the appropriate time to be sure she didn’t forget me. I also had a key to their house so there had been occassions when, for one reason or another, I would break in and make myself a peanut butter sandwich during the day. (Don’t tell Craig but I’ve done that at his place too.) As time went on I started to develop a bit of a neurosis when it came to any kind of food prep. Having to take food as a contribution to an actual dinner gathering caused me great stress. More often than not, (honestly, I love her to death), Sandra would make “my” salad or cake and I’d be off the hook. There really did come I time when I just couldn’t. I completely stopped pretending that there was any interest on my part in chopping things into a bowl and making something other people would actually eat. (The Horror).

Then I moved to Morocco. Things here are different. The variety of food available is much narrower and if you want something prepared and sold in store, you pretty much need to leave Morocco. Not happening. If I want hummus I need to make it. I need to get chickpeas, soak them overnight, boil them, cool them, process them myself. If I want to add tahini to it I need to go to 3 or 4 different stores, ask my cohort on the Internet, go back to stores and maybe then find some one random day.

Out of sheer necessity, I have learned to make things in my home. I have learned to make balls of all kinds. I love balls. You can make balls and then freeze them for later. Take out a few balls, let them thaw for 30 minutes and bam – dinner. I make turkey balls, beef balls, date balls, carrot cake coconut balls. All kinds of balls. I love my food processor. Friends love it when I give them balls. Surprise balls are always popular. Trust me.

I have been following an elimination diet at the behest of a local food guru. Its been essentially paleo all month. If you think you are all fancy out there in the west with your bone broth protein and premade, organic, grass fed, university educated, raised on religion beef bone broth, you can suck it. We don’t have that here. We have people behind the butcher counter who speak Arabic. Safi. Just Arabic.

I went for bones one day with a friend who “supposedly” speaks Darija. Apparently not. I walked away with 2 kilos of meat and a couple bones. I decided to ask for words in Darija that I could use on my own, and with those written in Messenger I pulled up to the butcher counter. I said, “Afek, atinini | bones | for soupsa” and then I said the words on my phone. They weren’t having it. Two people, neither knew what I was talking about. So I held up my phone and showed them the written word. The man starts mumbling out loud literally, “ask the butcher if they can give you …….” Me: “for f*ck sake you READ English? May I please have some bones, with marrow.” That’s when they started pointing at the brains in the cabinet, and my relationship with bone broth came to an end. Abruptly.

I recently discovered beef bacon. That brought a new level of joy to my life. A friend suggested that I cooked it all up in little pieces and use it like bacon bits, which is pure genius and I did that the other day. Now I just pull a clump out of the freezer bag in the morning, toss it in with the eggs and I am clearly the next Julia Child.

Ive been pretty proud of myself lately. I made homemade almond butter which is really delicious. Way better than any store bought almond butter I’ve had. I tried coconut butter but that was a bitter disaster that had me cursing the blog that made me do it.

Two days ago I texted a friend and asked for advice on cooking some really thin beef ribs that were soaking in bbq sauce in my fridge, just waiting to be delicious. “Cook them at low heat for 2-3 hour,” she said. “Gah, it’s 5:45 pm and I’m starved.” So eggs for dinner. I had very little food in the house.

Yesterday I was trapped inside waiting for a delivery, with very few food options, and I decided to be a good chef and get on those ribs early. At 2:00 p.m. I preheated oven, laid out the ribs on a pan, covered them in tinfoil and put them in. I sent photos to Amanda to get the inevitable “great job,” compliment.

Instead she said, “Oh no, I would take out the larger ones and leave the ones with bones only. Then cut the others so they are thinner and use those for a stirfry.” Ok so I’m trying to work out how to cut these thin strips thinner and had to initiate a video call. Apparently by thinner she meant, “like worms”, not filleted. So that was a relief. And quite frankly that fact that I didn’t get to that point on my own is indicative of my skill level in the kitchen.

Then she went on about spices, and tacos, and seasoning and Googling taco spices and cooking this bit that way, and that bit this way. Honestly, I just stood in rapt silence with dreams of Sandra cooking in the kitchen without any need for my help twisting in my brain.

Clearly Amanda doesn’t realize that I don’t cook. Seriously, ONE STEP per meal. That’s it. If there has to be chopping, I will accept two steps. But no more.

Then in my quietest, most private moment, my true character emerged and I felt so much more connected to my roots.

I was in the shower you see, talking away to myself as you do. I had been to the gym and I managed to pick up eggs and a case of water on the way home. Two things I needed. Planning the rest of my day. Scenario one I was able to go out, get lunch, head to the grocery store and get some much needed supplies. Scenario two however, was that I would be stuck in again waiting for the delivery, with no access to food stuffs so I said aloud to the water, “Ok. So I have eggs and water. At least I can survive.”

Honestly, can there be no middle ground?