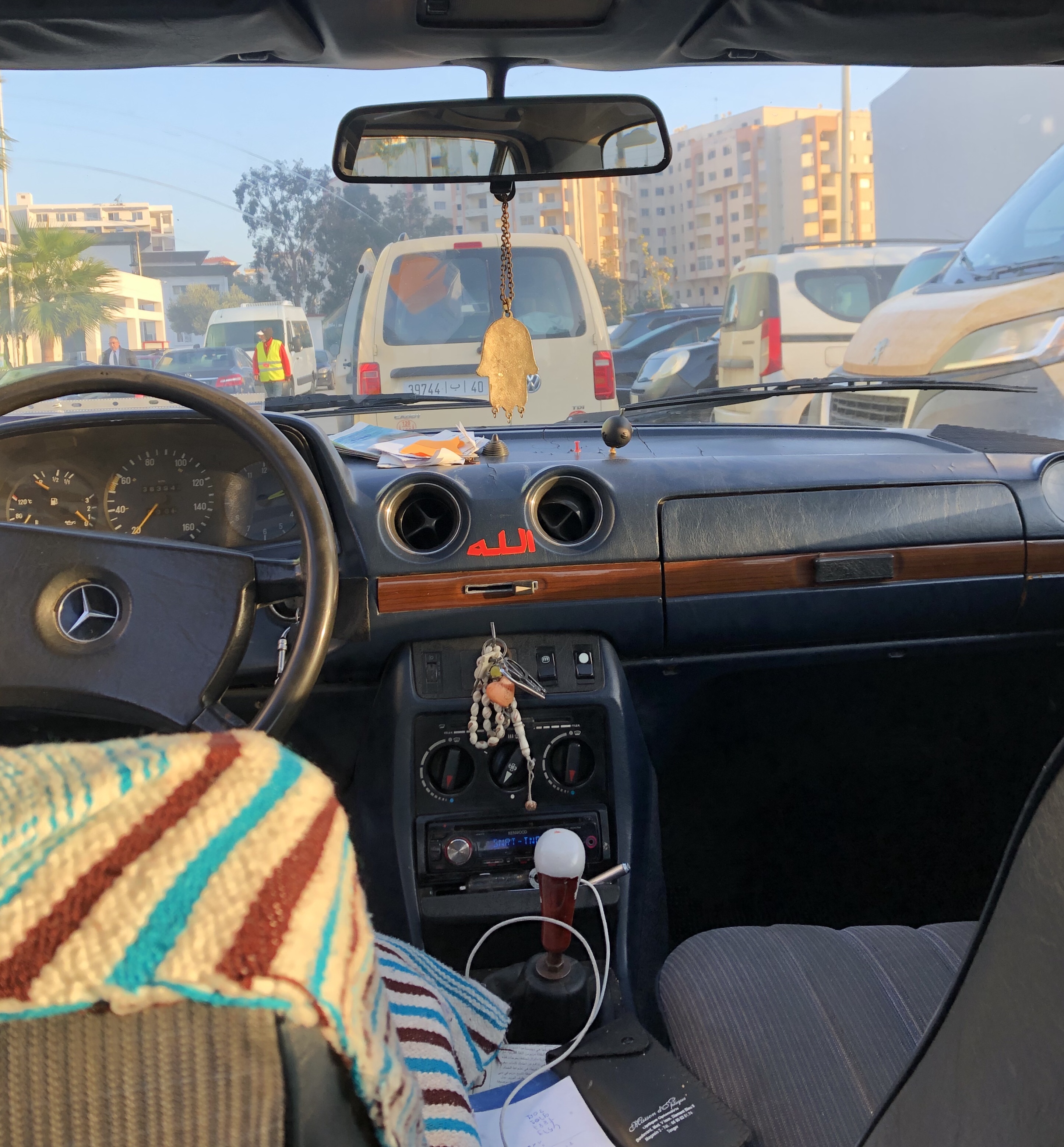 Alternatively titled, “Shut up and eat your ham sandwich.”

Talk about a day trip. I do not recommend this for the average tourist. We took a trip to Ceuta, Amanda and I. Jen and Kate went last week to check out the little Spanish enclave about 2 hour drive outside of Tangier, in Africa. They went to take a look. Then I became curious and since Air Arabia is offering 1 hr flights from Marrakech to Tangier for $50 US return, I said “why not?”

It was pretty easy to convince Amanda to join because she has two boys and a baby at home that she can shop for. Ceuta was left behind after the war you see and it is fully Spanish. That means cheap goods and things that aren’t available in Morocco. Very big attraction!

For Canadians it is very similar to cross border shopping. Lots of cheap goods, grab what you need and haul it across the border. In this case however, there is no customs to deal with so we didn’t need to cut out labels or destroy receipts.

The thing with Ceuta is this. It’s Spain. It is a Spanish territory accessible by a border that is about 2 km in depth. Two way road in width. The border, or “frontier” as it is called in Spanish is an insane place. For one it is packed with people, 99% Moroccans. Some are crossing and some are not. And they cross multiple times a day, every day, to fetch goods from Spain and deliver them back to Moroccan “bosses” on the other side. Hundreds of people camped out. Taxis by the hundreds. People waking. Milling. Clumping. And police. A ton of police.

So we took a taxi from Tangier this morning for about 2 hr before arriving at the frontier. We get out and the taxi waits for us. We arrived around 10 and arranged for him to be on the look out for us at 3 pm. There is no place for him to go so you pay for the whole day. But it’s an actual circus in the arrival area so there are vendors set up selling bread and eggs and drinks and other “stuff.”

We had empty backpacks each and walked to the line. The Moroccan ladies waiting waved us by and we went to the head of the line for passport control. The Moroccans who are crossing having a special permit that allows this if they live within a certain distance of the border. We walked along a cordoned off single lane stretch for a ways. Then we found a clump of people at a window and we joined them and passed through our passports for stamping and inspection. Then we walked for a long stretch in a cage. Single lane, fencing on both sides and top. Then it came out to another wider area blocked by concrete. Near the end we had police check the stamp then another check the photo. Just like that we were in Spain. People everywhere. No sense to be made of it all, just general milling about. To the left of us you could see the lanes for cars to pass through, but it’s hard to get a driver that can cross so you go by foot.

Once inside we grabbed a bus because it was there. Busy. Loads of people. €0.80 into town. While the language was mostly Arabic and the women Moroccan we had a hard time understanding the mayhem. There was a fight you see. Some man with a jaundiced appearance at the front of the bus was yelling which caused a woman to reply and other women to chime in. 10 minutes or so, 12-14 Moroccan women yelling loudly in Arabic to be heard over one another. Honestly, it was exhausting. Some carrying blankets filled with “stuff” and others (wisely) hauling empty suitcases.

Once downtown we walked along the main shopping street. A couple blocks. Mostly shoes and clothing, some pharamacies. Picked up a few things here and there. We stopped and had Spanish pastries and I had a h sandwich for lunch and we were done. Off to taxi stand and we got a cab to Carrefour which was HUGE! Think Spanish Walmart. Loads of merchandise. Aisles and aisles and aisles of it. It was a festival for the retail deprived. We LOADED up. Some package food items, chicken noodle soup mix, a big frying pan, some vegetable stock, a non slip shower mat, some coffee and on it went. At the end of it, we each had full backpacks and lots of bags. Amanda was loaded down. Too bad she didn’t have the foresight to bring an empty wheely bag.

Then we had to go back. Back across the border. We took a taxi to the frontier, but we got to a line of traffic and the taxi man basically said, “get out and walk. I’m turning back.” It was pandemonium at the frontier. Cars, bikes, buses, goats, people, bags, backpacks. People climbing through fences and over top of one another. It’s was madness. So we set out to walk the 2 km across the border along the lanes and concrete and fencing.

This time there were a lot of police. A LOT of police. Spanish police with sticks and a lot of grabbing people and cuffs upside the head and herding. There was a lot of herding of crowds and shuffling along into clumps. Pandemonium.

We had both hands filled. Loaded. Single lane of traffic and not really everyone was moving at the same speed. At one point I said to the back of Amanda’s head as we trudged on, “my passport is in the bottom most front pocket of my backpack. I will turn around, you unzip the pocket and get the passport.” At the first sign of slowing we executed the “twirl and grab” and off we continued. Past more police with complicated looking guns and clubs. Lots of clubs.

There came at some point a window in a wall. I would have easily walked right by had Amanda not stopped. We clumped with a bunch of people and basically just tossed our passports through the window. Ladies said “watch your bags” in Arabic (nice) and we waited and got the stamps and the passports were handed back through the ranks and off we trudged again until the other side.

After the passport control there were hordes of men now, milling about, waiting for their “mule ladies” with the goods. We witnessed all sorts of women in multiple layers of clothes “unpacking” to leave the stuff (to make its way to markets and Medinas all over Morocco). The ladies will then go back across the border for more.

Finally we found our taxi and made the return trip to Tangier where the goods got unpackaged and repacked for the return trip to Marrakech tomorrow. I have always wanted to spend time in Tangier and I still do. It’s a gorgeous city and I will be back. Not so sure about the whole border crossing adventure though.